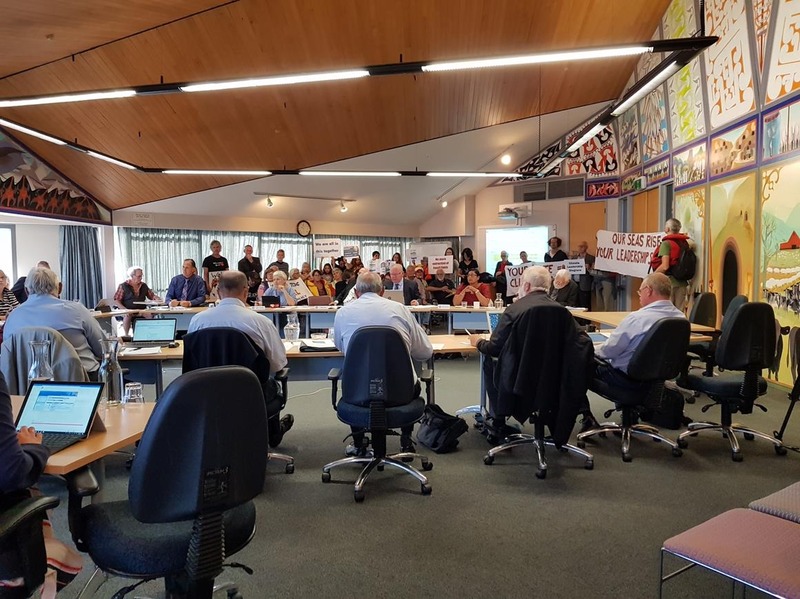 The majority of Thames Coromandel Councillors (five) voted against a resolution to sign a Climate Change Document drafted by Local Government New Zealand (LGNZ) that commits councils to plans to reduce greenhouse gases, increase resource efficiency, promote public and low-carbon transport and support the use of renewable energy. Three were in favour.

Councillors welcomed the large public forum at this morning’s meeting and the members of the community who came to present their views to Council around climate change.

Thames Coromandel Council agreed to keep taking action in response to climate change for their communities in Thames-Coromandel.

Matters around climate change were discussed as part of today’s full Council meeting, where Councillors agreed to take a broad view on how their Council can help mitigate the drivers of climate change, and to look at how other councils are responding to carbon management and the reduction of greenhouse gas emissions.

Mayor Sandra Goudie says it was encouraging that most of those presenting to Council agreed that Council’s actions spoke louder than words when it comes to the climate change challenge.
While our Council has not signed the declaration, it is already committed to working on many of the initiatives within the declaration itself.
These include:
• Supporting walking and cycling infrastructure within our communities;
• Supporting a public transport service in Thames and the uptake of electric vehicles through working to develop a network of charging stations across the district;
• Proactively engaging with our coastal communities on shoreline management plans that will identify long term management strategies for each coastal community, and will take into account projected sea level rise scenarios associated with climate change;
• Advocating to central government on leading the response for small coastal communities like ours when it comes to possible threats to infrastructure, private property, the local economy and livelihoods.

“Both LGNZ and Council will continue to look at the Government to lead the way forward,” Mayor Goudie says.
She says she was very impressed by the presentation to Council from two Thames High School students, and wants to work with them to follow up on their request to share more public education on climate change.
“The decision not to sign the declaration does not mean our Council does not take climate change seriously”.
However, she says the initiatives described in the declaration have not yet been canvassed across the district and have unknown financial and legal consequences.
In her view, the declaration has the potential to be a legally binding document, and Council and individual elected members could be at risk if it did not uphold all the initiatives.
“This declaration doesn’t indemnify us from action or inaction.”
She points to an example where Forest & Bird took the New Plymouth District Council to the Environment Court in 2015, saying it was in breach of its Memorandum of Understanding in a case involving significant natural areas.
“The only way we can be protected is if Government indemnifies us, so we are vulnerable either way,” the Mayor says.

“There have been statements out there that I’m a climate change denier – this is patently incorrect and misrepresents the facts.”
“Our Council will continue to take action, following robust decision-making processes, in response to climate change for our communities.

The Council passed a resolution asking staff to take a broad view of the actions undertaken to mitigate the drivers of climate change and to scan how other councils are responding to carbon management and the reduction of greenhouse gas emissions.