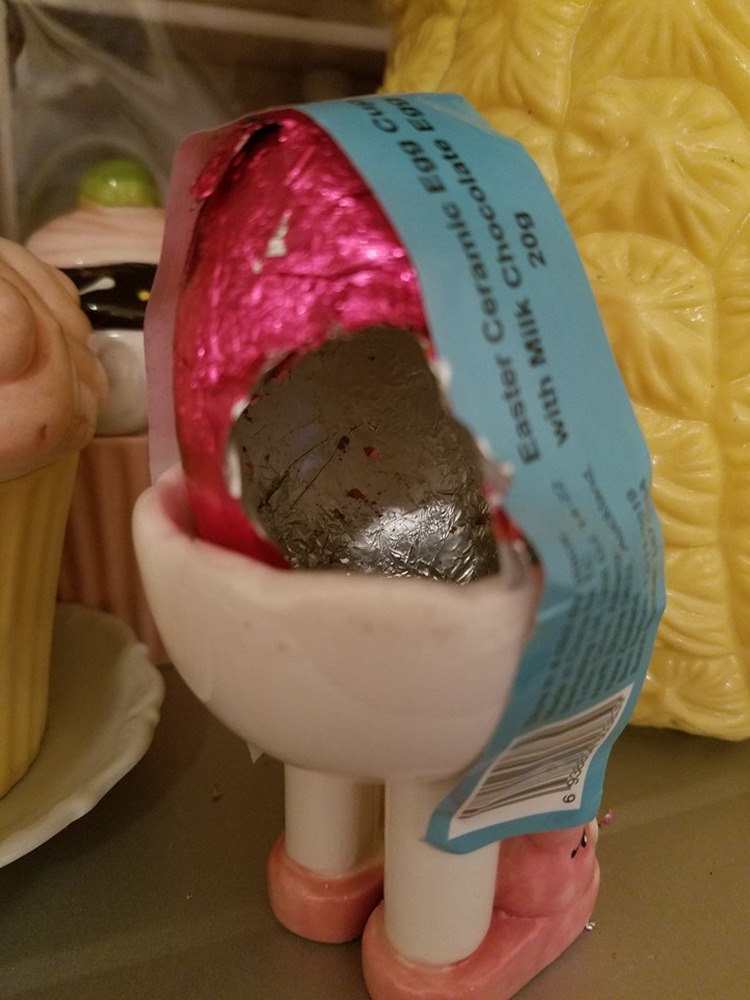 Did you know rodents are chocoholics?

Just before Easter one of our staffers went to their special hiding place to get the stash of chocolate Easter eggs that had been bought for family gifts and the annual family Easter Egg Hunt. They noticed quite a lot of small pieces of paper and foil beside the bag of chocolaty goodness and on closer inspection found five; yes FIVE marshmallow eggs were gone and a dark chocolate bunny had a large hole in his stomach.

A family discussion ascertained the culprits were most likely not two legged and a bit of detective work went into thinking as it’s getting colder; perhaps a mouse had sneaked in over the weekend when the door was left open during gardening forays.

Unfortunately for ‘Mickey’ a trap was set in the kitchen and he was dispatched to mousey paradise later that afternoon.

A family member commented that FIVE marshmallow eggs and a chocolate bunny mutilation was a bit rich for one small rodent so the trap was reset. Not too much later it snapped up another chocolate thief and was reset.

The next morning it was ‘three dead mice’. Then later that day a gifted Easter present of a cute egg cup wearing rabbit slippers which had an intact foil wrapped egg had little sparkly bits of foil telling tales on top of the microwave. Up close and personal the hollow foil egg was hollow foil – zero chocolate egg…minute chocolate crumbs.

Trapping has been going on in earnest and so far SEVEN mice have made their way to mousey heaven with bellies full of chocolate. One had a reprieve when it got caught and went into hiding with the trap stuck to its leg. It got sprung when it attempted to move hiding place and was spied sneaking under a shopping bag dragging the trap. Kindness ruled and that little mouster was taken outside and released.

We’ll update you on the final tally.

The moral of the story is as it’s getting colder rodents are looking for nice warm nests to winter over in so shut your doors behind you when you go in and out.

Chocolate seems to have more allure than the Piped Piper, so if you have a little spare it might be a good substitute for cheese or peanut butter when baiting a trap.

This mousey story got us thinking about a chocolate flavoured mouse trap and its likelihood of commercial success but a scan with Mr Google showed we’d been beaten to it as scientists in the UK have apparently already invented a chocolate scented mouse trap that doesn’t require bait.

Check out the photos of the missing bits from cute egg cup wearing slippers.