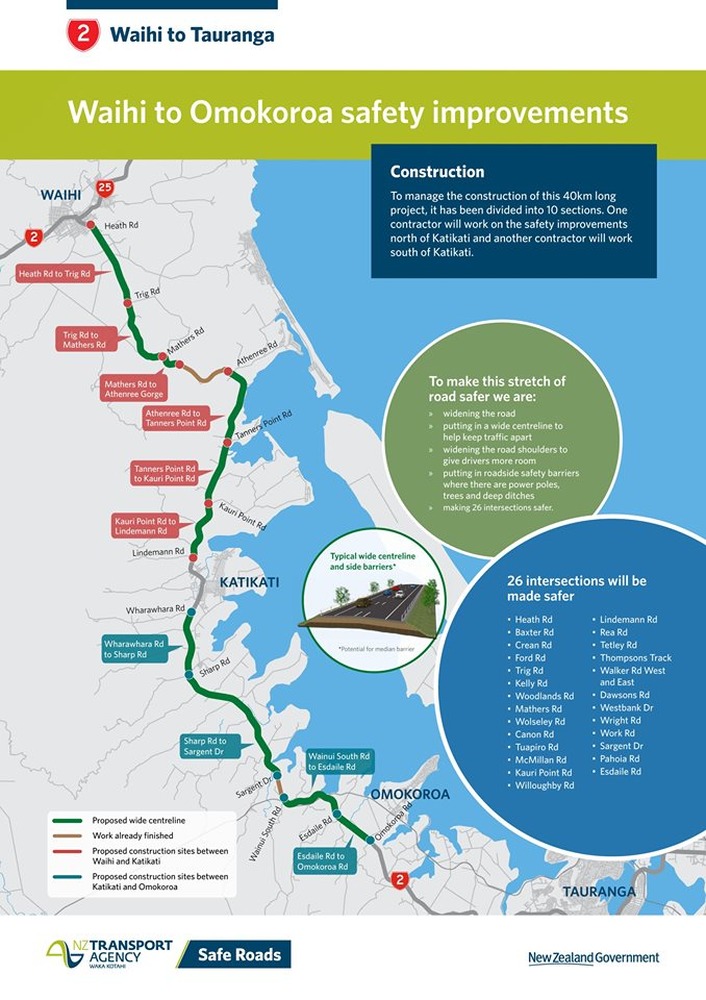 The first stage of a $101 million-dollar project to boost safety and save lives on State Highway 2 (SH2) north of Tauranga will be finished on schedule in July, with work now underway on the remaining sections.

Associate Transport Minister Julie Anne Genter visited the SH2 Omokoroa to Waihi project on Tuesday as part of Road Safety Week, and said she’s pleased by progress to improve safety on one of New Zealand’s most dangerous stretches of road.

As part of the visit she also visited Waimata School to see first-hand the benefits of recent improvements where a simple measure like a right turn bay has made it safer for people to turn into the school.

“Between 2006 and August 2018, 30 people lost their lives and 84 were seriously injured in crashes on this road,” Julie Anne Genter says.

“Most of these deaths and serious injuries were the result of head-on collisions, crashes at intersections, or drivers running off the road and hitting trees, poles or ending up in deep ditches.

“Often these kinds of crashes are the result of a driver making a simple mistake, but we don’t accept that simple mistakes should result in tragedy. On this road, we’re widening the centre line to help keep vehicles apart, we’re upgrading 26 intersections to make them safer, and adding safety barriers to prevent vehicles running into obstacles.

“This work will keep people safer now and create the space needed for further work to happen in the future.

“Too many people are being killed or seriously injured on our roads. That’s why this Government has invested a record $1.4 billion over three years to upgrade some of our most dangerous roads, like this one,” Minister Genter says.

Gold FM understands some drivers regularly using the road alongside Waimata School are not as pleased about the work done as the Minister is. We spoke to a Waihi resident who uses the highway daily to commute to and from Tauranga. She said the lumps and roughness of the road in the area make it even more dangerous than it was before, especially when it’s wet.

Community engagement and surveying are underway for the remaining nine sections. With all the improvements, along the whole stretch of the state highway, expected to be finished in 2023.