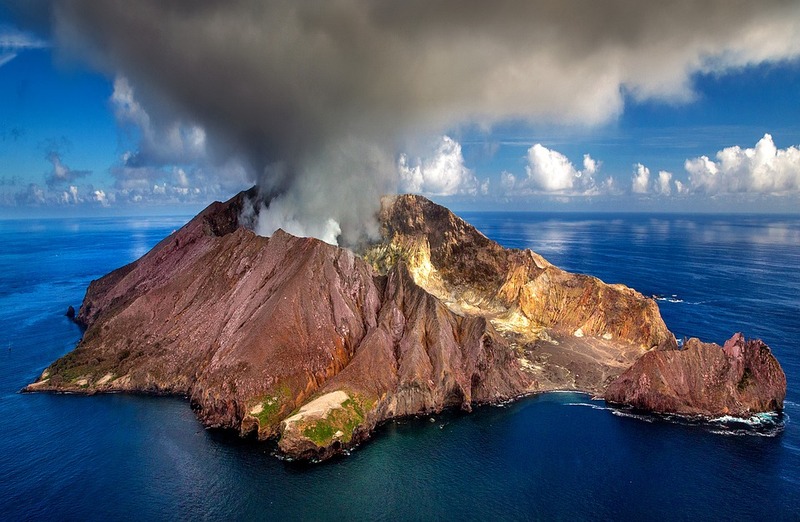 Whakaari – White Island, New Zealand’s most active volcano has been living up to its description with a swarm of earthquakes detected since late last week. The quakes began last Thursday and steadily increased intensity within 24 hours.

The swarm does not appear to be linked to volcanic unrest but may result in increased landslide risk on island.

Since Thursday, 196 earthquakes have been located. 22 earthquakes of magnitude 3 or greater occurred within 24 hours, with the largest three at M3.9, M3.8, and M3.8. The swarm appears to be tectonic in nature, unrelated to volcanic processes.

The GeoNet Landslide Duty Officer reports there may be a heightened risk of landslides as the earthquakes are shallow, local, and local material is relatively weak.

There are no changes in volcano monitoring parameters or the level of volcanic activity at Whakaari/White Island. Observations are consistent with minor volcanic unrest and the Volcanic Alert Level remains at 1 while the Aviation Colour Code stays at Green.

While Volcano Alert Level 1 is mostly associated with environmental hazards, eruptions can still occur with little or no warning.

Did you know Whakaari - White Island suffered a mining disaster? The island was once mined for sulfur.

Attempts were first made to mine sulfur on White Island around the beginning of the 20th century. September 1914, 10 miners were killed when part of the crater wall collapsed, causing a landslide. The miners had been dropped off on the island just a few days prior to the disaster.

When a launch owner, Albert Mokomoko, received no reply to signals to the men he became concerned and tried to land on the island with his launch. His first attempt failed so Albert reported concerns to the mining company headquarters and went back to attempt another landing. His second attempt was successful but confirmed something dreadful had happened as where wooden buildings and equipment had stood was now bare scorched earth.

Building timbers and part of the manager’s wire stretcher were found floating in the sea.

When the likely course of events was finally put together It was assumed that, some 800 metres from the camp, part of a massive, weakened cliff face had fallen, blocking a steam vent. Subterranean pressure had then quickly built, bursting through the lakebed to create a mudflow that swept seaward, burying the buildings, equipment and men.

Large explosions heard from the mainland and sightings of dark pillars of dust above the island indicated that the violent eruption had begun about 2.30 am on Friday, September 11 - the workers’ fourth night ashore. Had anyone managed to stumble out into the darkness, they would have found no clear path to safety.

The only survivor was the mining company’s cat, Peter the Great. Peter was one of five camp cats.

Sulfur was used in the manufacture of sulphuric acid and superphosphate fertiliser.

Sulfur mining on White Island recommenced in the late 1920s but proved uneconomic and ceased in the early 1930s when the company was losing money and the venture closed. A total of 11,000 tonnes had been obtained.