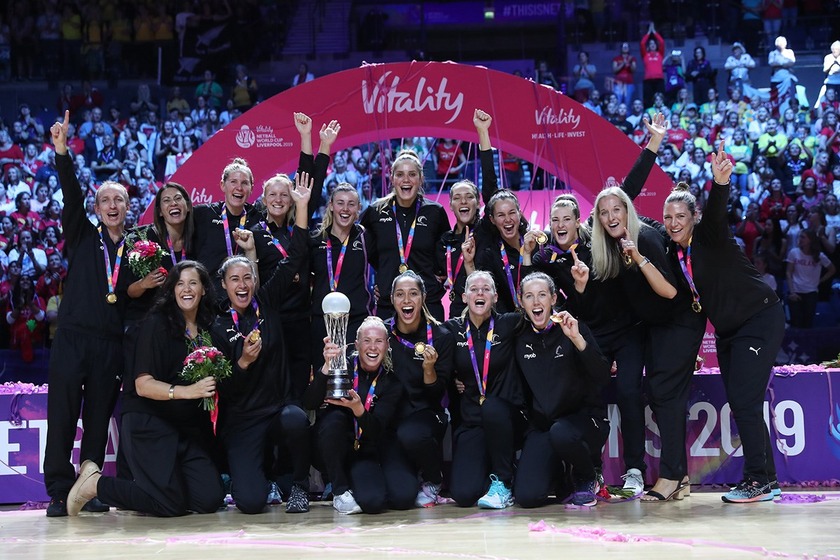 The Silver Ferns completed a spectacular rise back to the top after clinching a memorable 52-51 win over Australia in the Vitality Netball World Cup final in Liverpool on Monday morning (NZ time).

In a vintage trans-Tasman clash, Australia trimmed a four-goal deficit at three-quarter time to chase the Silver Ferns hard all the way to the finish line, the growing resilience and character shown by the New Zealanders, after a tumultuous previous 12 months, in evidence as they held on to pocket their first title since 2003.

Heading into retirement, it was a fitting finale for outstanding defender Casey Kopua, filling the only gap in a glittering resume with a Netball World Cup title, along with her fellow experienced trio of Laura Langman, Maria Folau and Katrina Rore.

Charged with turning the Silver Ferns fortunes around 11 months ago, coach Noeline Taurua has fashioned a remarkable turnaround for the women in black during her short tenure.

“It’s quite a weird feeling,” a relaxed Taurua said afterwards.

“I was very calm coming into this and wasn’t too sure what to expect but I’m absolutely proud and actually quite speechless.

“Our fossils (older players) stood up and led from the front. Every day was always going to be a challenge for us, to come out here and do this in the final is massive for the Silver Ferns, for Netball New Zealand and just for the general community at home.

“It’s amazing and it was a great game, an epic encounter and I’m absolutely ecstatic.”

Both teams retained the same starting sevens of their previous match-up in the preliminary rounds, which Australia won by a solitary goal.

The occasion was evident, pressure having a telling impact after a shaky start by both teams with turnovers going either way.

With towering shooter Caitlin Bassett being a key target, Australia got plenty of ball into her hands early on before the Silver Ferns, through more heroics from in-form defender Jane Watson, helped the New Zealanders stay in touch.

The Silver Ferns got things back on an even keel when levelling the scores at 10-all heading into the first break.

The goal-for-goal impasse continued on the resumption, the Silver Ferns lifting the pace as shooters Folau and Ameliaranne Ekenasio found their groove to provide better movement, flow and accuracy.

The scoring accelerated from both sides but neither was unable to break the tense deadlock. The Silver Ferns defensive trio of Watson, Kopua and Rore continued to put the squeeze on Australia’s attack line.

Pouncing on a rare loose ball, Rore provided the impetus for the Silver Ferns to finish with a mini-flurry considering the circumstances when they took a handy 28-25 lead into halftime.

That prompted changes from the defending champions for the second half, newcomer Sarah Klau slotting in at goalkeeper for Australia and the inventive Gretel Tippett at goal attack. The Silver Ferns made no changes.

With Ekenasio continuing her rock-solid form under the hoop, a patient and composed Silver Ferns maintained their control to leave an under-pressure Australia chasing the game.

Outstanding defensive work by the New Zealanders stalled Australia’s attacking momentum, the steadying hand of Gina Crampton at wing attacking prompting another change from the Diamonds.

April Brandley replaced Jamie-Lee Price at wing defence, the Silver Ferns keeping a late-charging Australia at bay during a pulsating third term to lead 41-37 ahead of the run home.