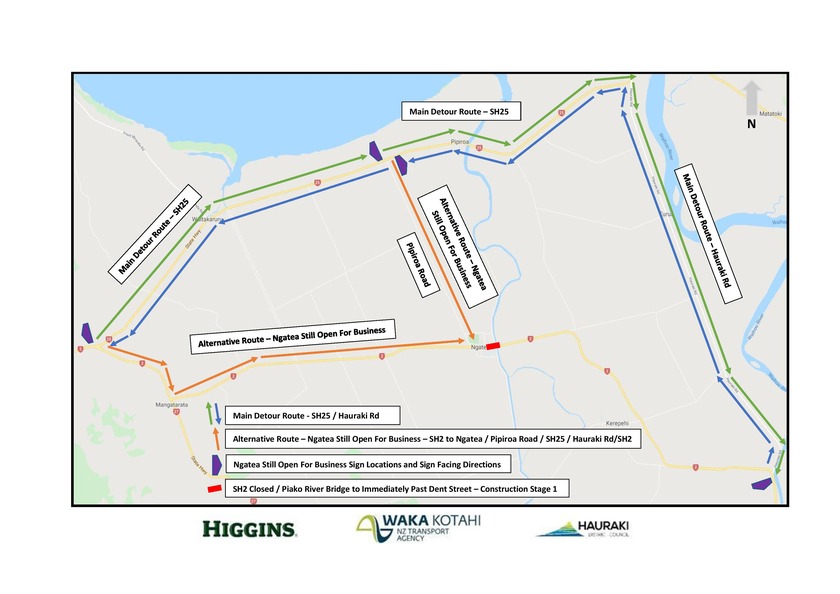 State Highway 2 at Ngatea’s CBD is closed until 3pm Friday 24 January but the town is still very much open for business.

The road closure, which extends from the Piako River Bridge to just past Dent Street, marks the start of two separate projects to upgrade the town’s main street. Hauraki District Mayor Toby Adams says Waka Kotahi NZ Transport Agency is renewing the main highway and it’s important the Council upgrades the kerb and channel at the same time.

“We need to fit in alongside NZ Transport Agency timeframes to minimise disruption and the cost to our ratepayers. The two projects must be done in alignment,” he said.

For safety reasons the road needs to be closed for two weeks for stage one of the project from the Piako River Bridge to just past Dent Street. This is because the road in this area is too narrow to allow workers as well as one lane of traffic. Work includes removing the existing kerb, digging up the existing road, putting in the base course layer of the new road, and installing the new kerb.

This work is expected to be finished by 3pm Friday 24 January, and the road will be reopened to one lane, in time for Auckland Anniversary traffic. The final asphalt surface won’t be laid until near the end of the overall project.

The contractor has advised that work to dig out up the existing road (from the Piako River Bridge to just past Dent Street) will take place overnight tonight, Thursday 16 January. They understand this will create some noise for nearby residents, and appreciate your patience while they get this work done.

It’s expected the next part of the construction work, which includes the highway renewal and kerb and channel will take about 14 weeks, dependent on weather.

The road will be re-opened to one lane while this stage takes place and motorists heading from Auckland to Bay of Plenty will continue to be detoured, while traffic going from Bay of Plenty to Auckland will travel through the town.

NZ Transport Agency says motorists can expect some delays. Please be patient and allow extra time for the detour.