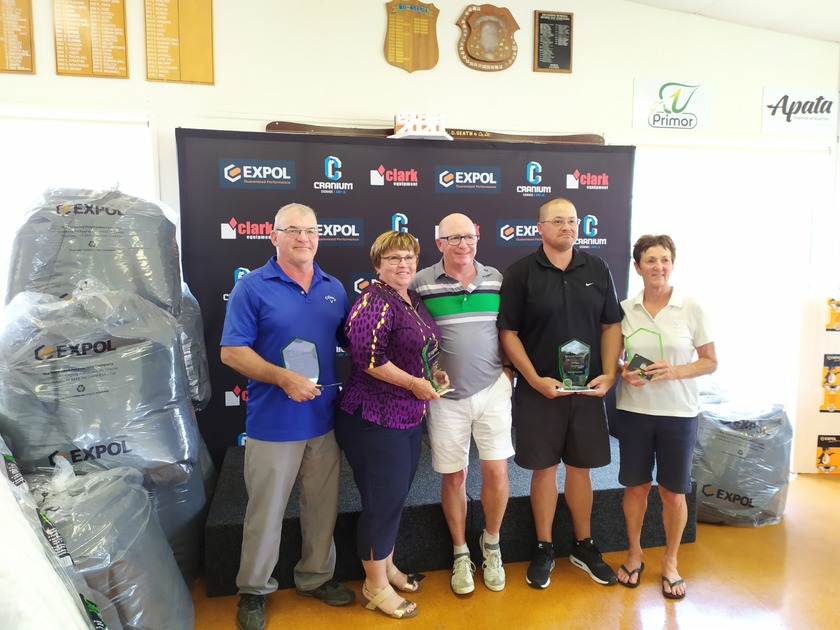 It is unprecedented that such a small country Club as Waihi be offered the opportunity to stage a New Zealand Professional Golfers’ Association Pro-Am teams’ tournament over two days.

This daunting task was taken on by a committee experienced with many years’ organizing Waihi’s popular 54-hole tournament, with months of planning toensure the event would be the success it deserved.

Dominic Sainsbury , Chief Executive of New Zealand Professional Golfers’ Association guaranteed to supply 30 professional golfers, each to lead a team with three amateur golfers in a stableford competition over the two days, with the emphasis on fun.

Major sponsorship was undertaken by Terry Mischefski, of Expol Home Insulation , with other prominent businesses such as Aspect Blinds and Shutters, Cranium Signage, Clark Equipment, Gas NZ, Carlton Party Hire and GolfWarehouse coming on board with much enthusiasm and generosity. Some local businesses also entered the spirit of the event by adding to the list of sponsors, e.g. Flat White Café Waihi Beach, Waihi Beach RSA, La Vie en Rose TapasBar, and Waihi Beach Hotel.

The tournament was opened by Committee chairman John Eliott, who welcomed players as they assembled near the first tee, where ninety-year old Bob Hoggard, a member of the Club for 50 years, was invited to open the tournament by hitting the ball before players dispersed to their tees for the shot-gun start.

To his profound relief, the ball ran straight and far, and he continued to play steadily throughout his game to return a gross score equal to his age.

The course, groomed to perfection despite the lack of significant rain for more than a month, was as pretty as a picture, and the excellent but challenging greens and fairways played hard and fast.

Many Club members came to the fore to help in working bees when necessary prior to the event, carrying out tasks that the general staff just did not have time to do.

Mindful of the need for the safety of players and spectators on the course during the tournament,Club members served as traffic officers in strategic places, waving stop/go flags to prevent accidents caused by wayward shots, or long-hitting professionals.

On the first tee Expol had a continuous barbecue running and the smell of sausages and onions tickled everyone’s taste buds as they approached from 100 metres out. One does not usually expect to see diggers and front-end loaders on a golf course, especially brand new and idle, but Clark Equipment had one of their machines on the 13th tee with the large bucket filled with ice, liquid refreshments, and tables in their tent laden with spicy, tonsil-tingling snacks for hungry and thirsty players as they passed by.

Expol Home Insulation and Aspect Blinds and Shutters had their products strategically placed near the Clubhouse,and Cranium Signage added their expertise to signs and flags on all the greens and teeing grounds.

Fluttering cheerfully in the breeze were many teardrop flags advertising tournament sponsors adding to the carnival atmosphere.

Everyone enjoyed a magnificent dinner supplied by the Club caterer, Cheryl Priestley and her staff, then were entertained by Brendan Telfer interviewing Grant Fox, well-known All Black selector, who gave a most interesting address, answering many questions that one would not normally be privileged to hear.​On both days the weather was overcast and cool with a light easterly breeze, making very pleasant playing conditions.

Competitions were for teams’ combined stableford over the two days, with three of four scores to count,the Maureen Murray Trophy for best stableford over the field, subsequent amateur stableford prizes and a separate competition for the professional golfers for the best gross score in the tournament . Novelty prizes were awarded for Nearest the Pin on all par threes, and would have been awarded for the first Hole-in-One for both professional andamateur players over the tournament, but sadly not achieved.

Team prizes were presented by Expol’s Terry Mischefshi, the major sponsor of the tournament.