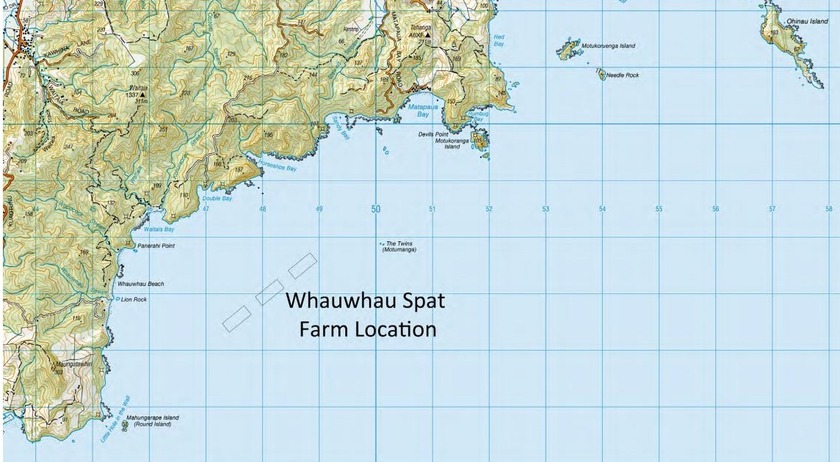 A proposal for a spat farm in Mercury Bay has been given the green light by independent commissioners.

The commissioners’ decision to grant a resource consent for 20 years was released yesterday. It was made following five days of hearings in December last year. A consent term of 35 years had been sought.

The commissioners were satisfied that the proposal could be “advanced in a manner that is appropriate to the coastal environs that it will exist within”.

The application to establish the spat catching farm at Whauwhau, in outer Mercury Bay, was lodged by Coromandel aquaculture industry businessman Peter Bull and Joe Davis (on behalf of Ngāti Hei) in February last year.

Spat farming involves free-swimming larvae (baby mussels) attaching themselves to spat catching ropes. The ropes are then transferred to a mussel farm for the mussels to continue growing.

The proposed spat farm, which would be located about 1.6 kilometres offshore, comprises three blocks of spat catching infrastructure consisting of backbone lines, floats, anchors and dropper lines. Each block will be approximately 10 hectares in area – about 30 hectares in total.

The application attracted 204 submissions - 195 in opposition, 5 in support and 4 neutral.

Key concerns included that the spat farm would affect the landscape, natural character and visual amenity values of Mercury Bay and impact negatively on marine life.

The commissioners heard from relevant experts in all matters and carefully considered the evidence to guide their decision making.

Submitters have 15 days from which the decision was received to lodge an appeal.