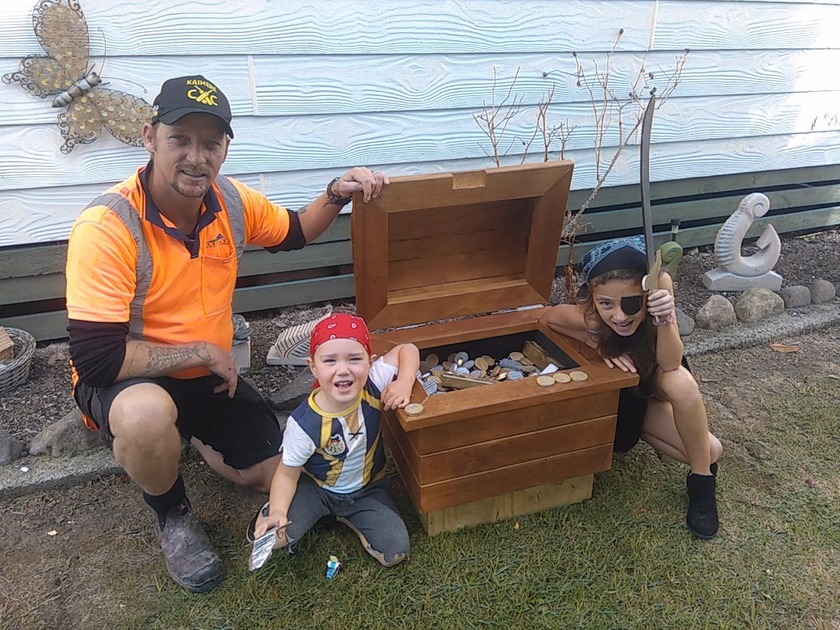 A large, hand-made wooden treasure chest for the pirate themed Kaiaua playground has been donated to the community by Hauraki District Council staff member, Des Hay.

The old treasure chest at the Kaiaua playground was plundered by high seas during the January 2018 storm and left worse for wear.

Council senior serviceperson Des Hay, who is responsible for playground safety on the Hauraki Plains and in Kaiaua, saw the sorry state of the treasure chest and decided that it was time for it to walk the plank. But with his ‘always go the extra mile’ work ethic, he wanted to do more to lift community spirits.

“When I asked if I could make a new one, my manager said ‘Go for it’. I’m always making something, so when lockdown started, I knew it was my opportunity to make it happen”, said Des.

As one of Council’s essential workers, Des has been hard at work during the Level 3 and 4 lockdowns but outside of work, he still found the time to make a large wooden treasure chest, filled with appropriate treasure for little shipmates and landlubbers to explore.

“The extra pride Des takes in his work exemplifies Council’s “it’s more than just a job” philosophy,” he said.

“COVID-19 has delayed the placement of the treasure chest, but it will have pride of place in the Kaiaua park as soon as alert levels allow.”