News / A spell of rain, then cool and calm 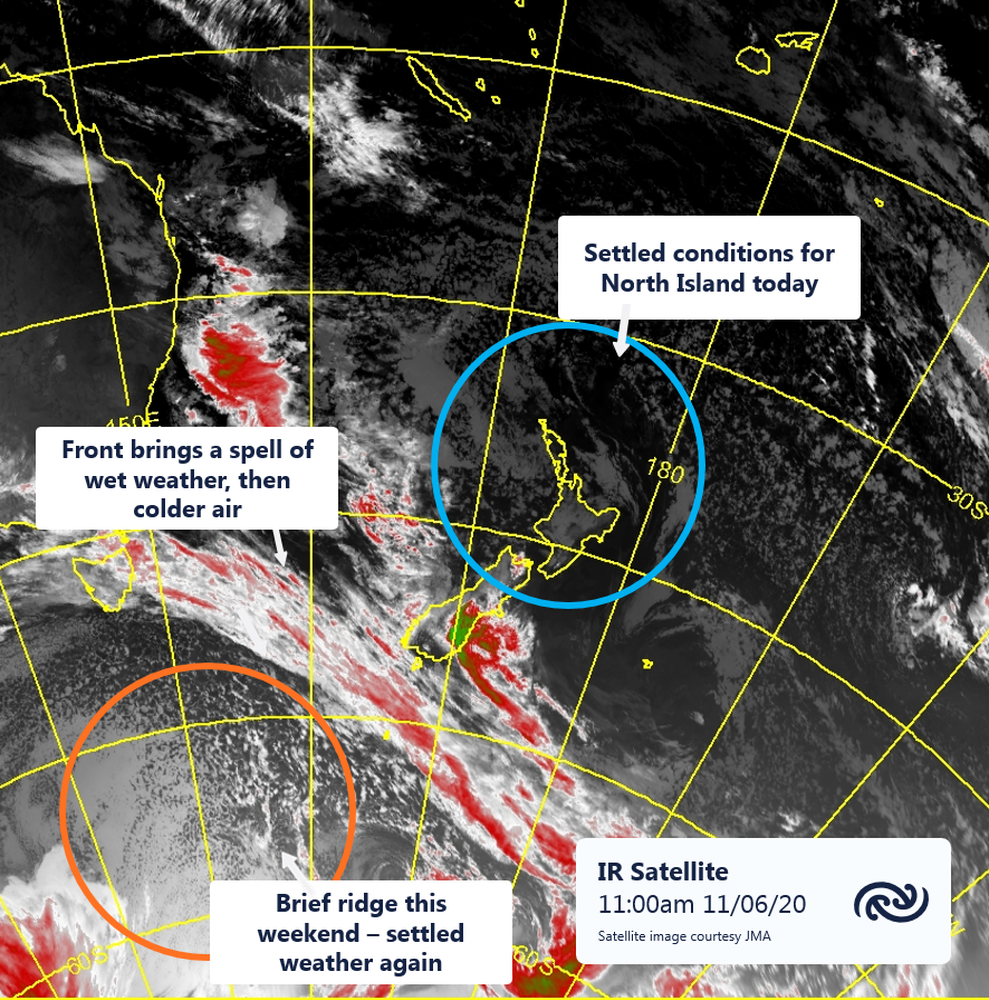 A spell of rain, then cool and calm

MetSevice expects changeable weather over the coming days. A ridge holds over the North Island today (Thursday) leading to settled conditions, while a cold front brings heavy rain to the South Island’s west coast. The front marches northwards this weekend, bringing with it a spell of wet weather. Settled and cold conditions end the weekend thanks to a brief ridge of high pressure, but another system approaches early next week, dragging warmer and moister air from the north Tasman Sea.

MetService has issued a severe weather watch for the front today, with heavy rain expected in Westland through to the early hours of tomorrow (Friday). The front makes its way north, but rain for the North Island will not be as intense.

MetService Meteorologist Andrew James explains “With the front running into high pressure, it weakens as it moves north, but for the early part of the weekend it will be wet north of about Taupō. This provides a small but useful top up for those on tank water in Northland and Auckland, but those areas are still running below average in terms of rainfall totals.”

The front brings cold air too. “Cold air can’t hold as much moisture, so skies will be fairly clear, and with a ridge in behind it conditions will be relatively calm. This is a good recipe for cold overnight temperatures,” says James. “Sunday morning will be the coldest for South Island towns. We’re forecasting lows of -5C for Alexandra and -2C in Queenstown. In the North, Monday is the chilly start with Auckland coming in at 8C and Taupō down to zero. These are below average, but it’s still normal to get these kinds of temperatures a few times each winter.”

With professional sport kicking off again this weekend, Kiwis will be keen to see the rugby. One of our meteorologists has a ticket to the Blues vs Hurricanes Super Rugby Aotearoa game on Sunday afternoon – he’s gone for a covered seat as there is still some uncertainty with the exact timing of rain clearance in Auckland.

The ridge at the end of the weekend is short lived, and another frontal system is waiting in the wings. This system originates in the northern Tasman sea, so it ends the cold snap. Above average temperatures are expected early next week, along with another dose of rain.