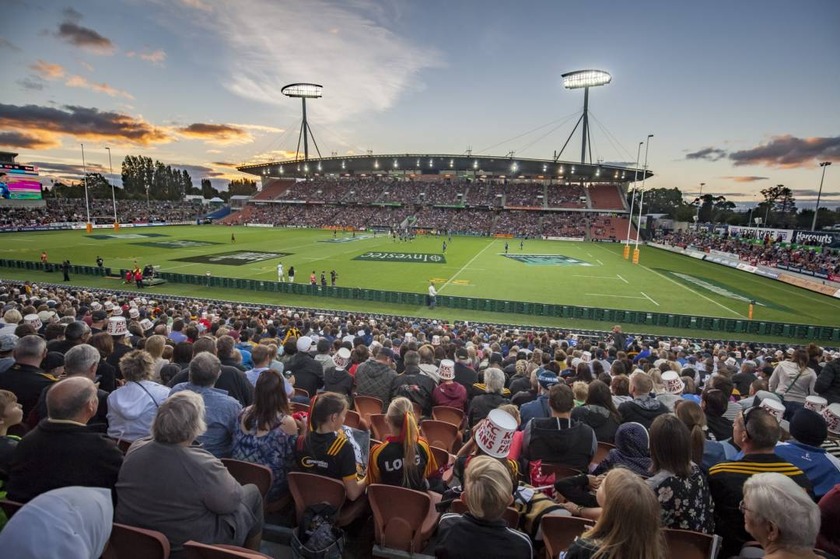 FMG Stadium Waikato kicks off with Gallagher Chiefs vs. Blues

This Saturday’s Investec Super Rugby Aotearoa match between the Gallagher Chiefs and the Blues will be a significant one for Hamilton’s FMG Stadium Waikato.

The game kicks off at 7.05pm and will see crowds return to the venue for the first time since restrictions on events came into effect back in March. It is the first of four Investec Super Rugby Aotearoa matches scheduled at FMG Stadium Waikato in 2020.

Sean Murray, Hamilton City Council General Manager of Venues, Tourism and Major Events, says he is expecting an incredible atmosphere at the game and encourages fans to get tickets early to secure a seat.

“We are anticipating a big crowd for this event, as we know there are lots of passionate Gallagher Chiefs fans who will be thrilled to be back cheering on their team from the stands. Blues supporters are also likely to make the journey down the expressway for the rivalry match,” he says.

“Our team and partners are equally as excited to welcome fans back to our venue and to get back to doing what we all love. We’ve been carrying out a lot of planning and work behind the scenes over the past couple of months in preparation for re-opening our doors to the public.”

New initiatives include the introduction of additional cleaners and sanitising stations around the venue, as well as new contact tracing procedures at each gate – with fans advised to purchase tickets online ahead of the game and arrive early on the day to avoid delays.

The venue has also worked alongside their catering partner Montana Food and Events to introduce a new contactless payment system across its retail concessions.

FMG Stadium Waikato Venue Manager Ben Slatter says while work on the contactless payment system was already underway prior to COVID-19, it was accelerated due to the pandemic.

“We’ve implemented and tested the contactless payment system earlier than originally planned so it can be available to rugby fans for the Investec Super Rugby Aotearoa competition. We are confident it will stand up to the demands of an expected bumper crowd at the Gallagher Chiefs v Blues fixture this weekend,” he says.

“To ensure fast, seamless service at our concessions, people should use Paywave as their primary method of payment.”

With the introduction of the new contactless payment system, ‘cash out’ facilities will no longer be available in the stadium.

Chiefs Rugby Club CEO Michael Collins says the excitement is building for members and fans to cheer on their Gallagher Chiefs.

“We are beyond happy to get our members, fans and stakeholders back in the stands at FMG Stadium Waikato to cheer on their Gallagher Chiefs.

“We are really excited to offer the contactless payment system as we think this will speed up customer service. With the excitement for the return of fans watching rugby live, I do encourage everyone to purchase their tickets as soon as possible.”

Tickets for the game can be purchased online at chiefs.co.nz or at the box office at Gate 1, FMG Stadium Waikato from Tuesday to Friday between 10am-6pm and on Saturday (game day) from 9.30am until kick-off, with contactless payment available.