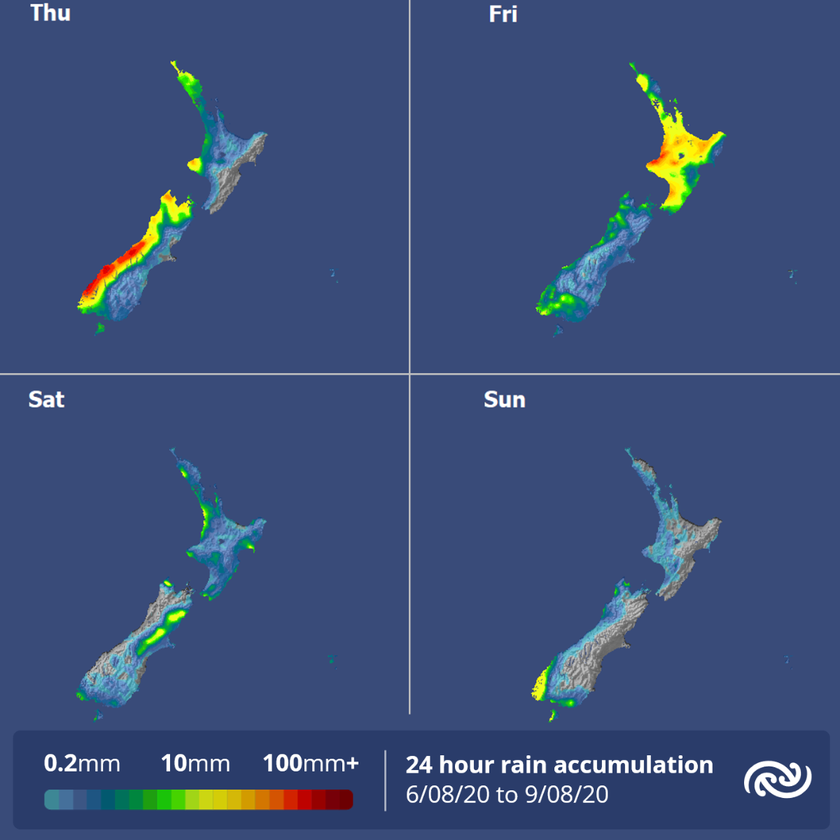 New Zealand says goodbye to the high pressure that has dominated for the last couple of weeks, as a low from the Tasman Sea and associated fronts move up the country from today (Thursday). MetService is forecasting a change in conditions as the pattern shifts from dry and settled to wet and cool.

The first of several fronts trundles up western South Island today, with rainfall becoming heavy for parts of the southwest and far north, where there is a Heavy Rain Watch in force.

MetService meteorologist Mmathapelo Makgabutlane elaborates: “Southern Westland and Fiordland may get heavier falls, especially with thunderstorms later today. The Richmond and Tasman ranges could also see some significant rainfall amounts thanks to strong northerly winds with this front.”

The upper North Island gets its first taste of the front late tonight as the day’s showers turn to rain, with the odd thunderstorm, and that template gets carried over into Friday. But perhaps the biggest change will be felt by those in the lower North Island when the front moves across the island on Friday, bringing a rainy end to what has been two weeks of unseasonably calm weather.

Another feature of the low is the strong southerly push of colder air late tomorrow, bringing snowfalls to the far south and up the eastern South Island on Saturday morning – a reminder that the country is still well in winter’s grip. This is echoed by Saturday’s daytime temperatures, as Makgabutlane explains: “Parts of the South Island can expect a return to single-digit maximum temperatures, and the capital only reaches 10°C”.

The series of fronts that follows ensures that most of Aotearoa sees some wet weather by the end of Saturday, before the fronts clear out and bring a dry day on Sunday for many. The North Island won’t need to wait too long for the next bout of rain, however, with another low from the Tasman approaching early next week.