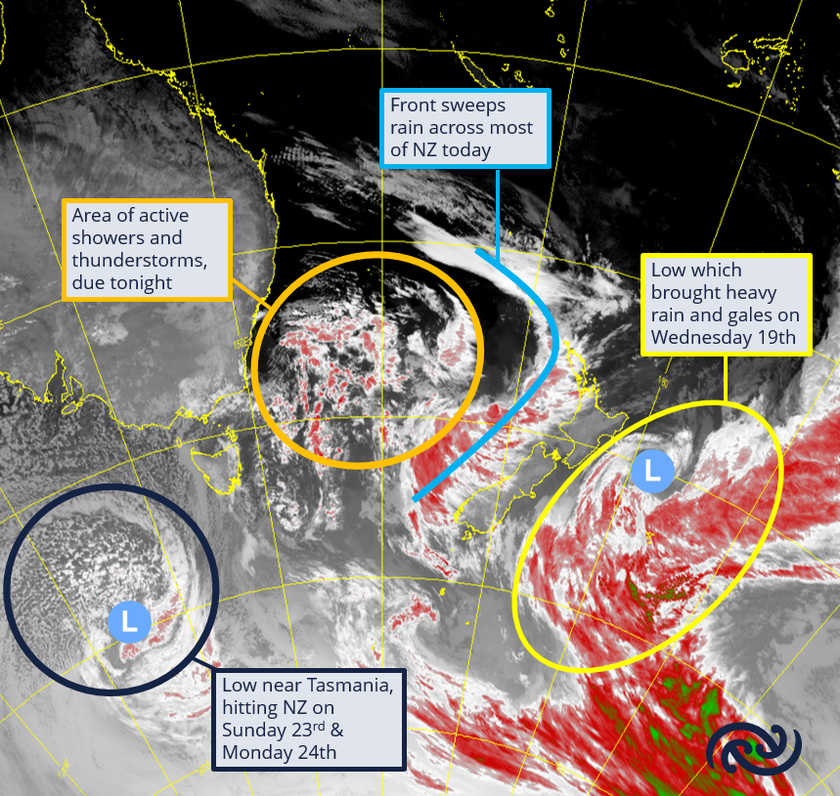 MetService is forecasting a continued period of unsettled conditions, with several lows and associated fronts bringing wet weather for many in the coming days.

The upper North Island got a brief taste of today’s active weather this morning (Thursday) as the first of a series of fronts swept across, bringing thundery weather for some.

MetService meteorologist Mmathapelo Makgabutlane elaborates: “A couple of frontal rain bands had thunderstorms embedded in them, and there was some accompanying lightning activity over Northland and Auckland.”

It’s not over yet, however, as Makgabutlane cautions: “Shower and thundery activity looks to return later today after a bright afternoon, so those in the upper North Island may feel like it’s four seasons in one day!”

Rain and showers feature for most of the North Island today and tomorrow (Friday) as the fronts move over, gradually spreading down the western South Island, where some areas are under a Heavy Rain Watch. “The ranges of Buller and northern Westland could get a period of heavier falls on Friday,” Makgabutlane details.

A few showers linger over the western parts of the country into Saturday. However, by the end of the day attention turns back to the upper North Island as the next wave of weather progresses from the Tasman Sea.

Sunday looks to mirror today’s template, with the rainy weather spreading across the North Island and upper South Island, bringing a close to what has been an unsettled weather week.

Those in Canterbury who have been waiting for anything more than the scraps of drizzle of late may get a brief respite early next week with hints of some rain from a low to the east of the country.