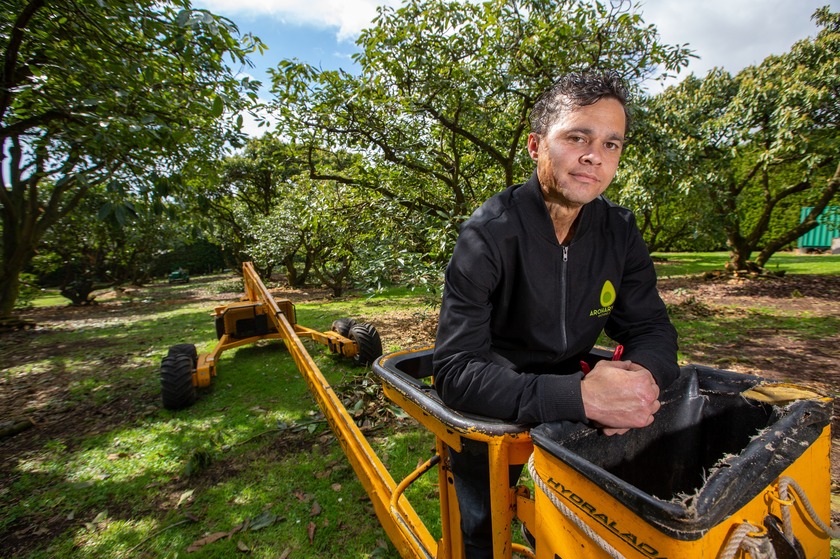 The first jolt of electricity from overhead power lines went through the right-hand side of avocado harvester Troy Hall’s head – killing him.

The second jolt, right through the chest, brought him back.

“That’s the one that lit me up. I was engulfed in flames for a while. I lost sight in my left eye, lost my right ear, 60% torso burns all over my body and legs, and a quarter of my face,” says Troy, who is reliving his accident to educate others about the importance of staying well clear of power lines.

The 31-year-old is sharing his story in a short film for Powerco’s public safety campaign, Look Up, specifically targeting horticultural workers in the western Bay of Plenty, where Powerco owns and operates the electricity network.

But it’s a safety message that will resonate with anyone – demonstrating the power of electricity with a hard-hitting reminder of what can happen if you get too close to power lines, Powerco GM Health and Safety Julie McAvoy says.

“Stay safe. When working and using equipment in and around orchards, please look up before you work and keep yourself and equipment at least 4 metres away from power lines,” Julie McAvoy says.

“You don’t even need to touch a power line to be in danger – electricity can jump the gap through the air to your equipment and to you. Every line must be treated as live. Always.”

It was October 2011 when Troy received the massive electric shocks when picking avocados at height on a cherry picker in a Matapihi, Tauranga orchard.

“On the day of the accident, it was raining,” recalls Troy.

“I remember, about an hour beforehand, actually popping out through the trees and through the power lines themselves. With the attitude I had back then, (I thought) it was just like a near miss and didn’t respect just how close I was at that time.

“The last memory I remember, is popping out of the tree and blacking out.”

It is understood that the metal cherry picker that Troy was working on, hit the power lines and the electricity jumped through the air to him.

Nine years on from the horrific accident, the recovery is still on-going for Troy, who has allowed for photos of his early injuries while recovering in hospital to be shown in the film as part of educating other horticultural workers.​

“I’m glad that this is going to get views, to make people aware of power lines and the real risks involved if you get hit by electricity,” Troy says.

“The recovery is on-going to this day, especially in the mental aspects,” says Troy, who now operates his own Bay of Plenty-based, avocado harvesting and tree pruning business called Aroharvest.

“At the start of the recovery, it was quite a depressing time. It took me pretty much over a year-and-a-half to two years to get any sort of mobility back – of feeding myself and walking, and any sort of independence. Even to this day, there’s a lot of restrictions.

“My advice to orchard owners and people working around power lines is to be aware of your surroundings and look up. I’d hate for anybody to go down the same journey I’ve been through over a split-second mistake. It’s really important to really take into account the power of electricity.”

Powerco will be premiering Troy’s filmed story and boosting it into the Bay of Plenty – the home of New Zealand’s avocado and kiwifruit industries – from this week.

The company is also seeking to work with the local horticultural industry bodies to show the film as part of their industry training around overhead power line safety.

Julie McAvoy says Troy provided a selection of his recovery photographs for use, which means the three-minute film is, at times, graphic in nature.

“ We appreciate that photos of Troy’s injuries may make some people feel uncomfortable. For this reason, we have specifically put a warning about the graphic content at the start of the video.

“ Horticultural workers have some of the highest rates of injury and death from overhead power lines. We need to be hard-hitting so that the message really gets through to people about the importance of staying at least 4 metres away from power lines to stay safe,” she says.