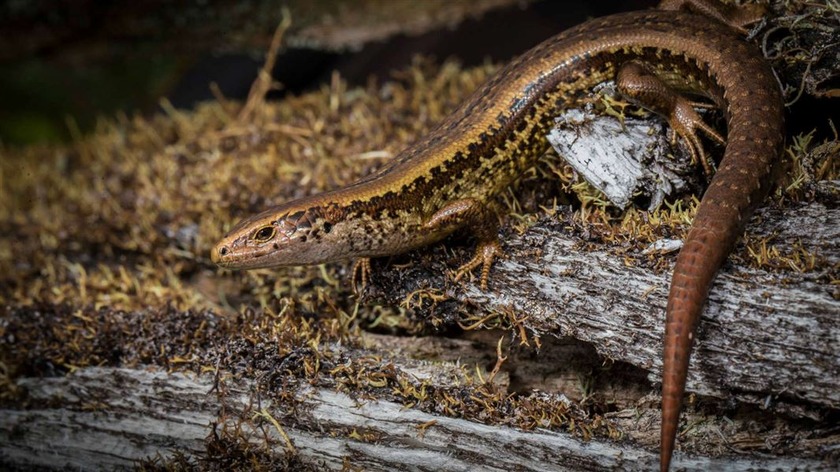 DOC is appealing for information after four-wheel drivers put a rare West Coast skink at risk by driving over their habitat.

The Alborns skink is part of the speckled skink family and is only found at one site near Reefton close to Big River, which is off-limits to vehicles.

Monitoring since 2015 has only detected 17 individuals, therefore the population is considered extremely vulnerable to extinction.

Four-wheel drivers have recently turned part of the site into a mud hole and driven over skink monitoring pit covers, which could have crushed and killed skinks.

Trees have also been illegally cut down to make new tracks, destroying the homes of the at-risk forest gecko.

DOC Senior Heritage and Visitor Asset Ranger Sam Symonds says the damage is thought to be related to an ongoing issue of vandalism in the area, with continued destruction of assets and vegetation at the Big River Hut and Mine site.

“On average DOC spends around $20,000 each year repairing damage from what is thought to be just a small number of people, and we’d like to stop them.

“If people have any information about who these people might be, please contact us at the Greymouth DOC Office on 03 768 0427 or greymouth@doc.govt.nz.

“As well as being really concerning for our vulnerable skink population, it’s such a waste of resources and a disappointment for other people who like to use this site, not to mention the public of New Zealand who are paying unnecessarily for damage to be repaired.”

The vandals have pulled up fences, ripped up track, destroyed grassed areas, intimidated hut users, done motorbike burnouts inside the hut, left rubbish, cut down trees, pulled down gates, smashed posts and cut wires and done donuts in a contaminated site (which is clearly marked as contaminated).

Damage to natural and historic features in a public conservation area is an offence under the Conservation Act 1987 and can lead to prosecution and up to two years in prison and/or a fine up to $100,000.

When the Alborn skink (Oligosoma albornense) was discovered in the 1990s, it was already in a critical state. Management of the species was delayed until they could be confirmed as a separate distinctive species.

DoC is not not sure whether they are difficult to detect or extremely rare. Before 2015, there were only 7 records of these skinks. More animals have been detected since research began in 2015.

Mice is likely to be a significant predator. Rats, mustelids, and the native weka will also be preying upon skinks.