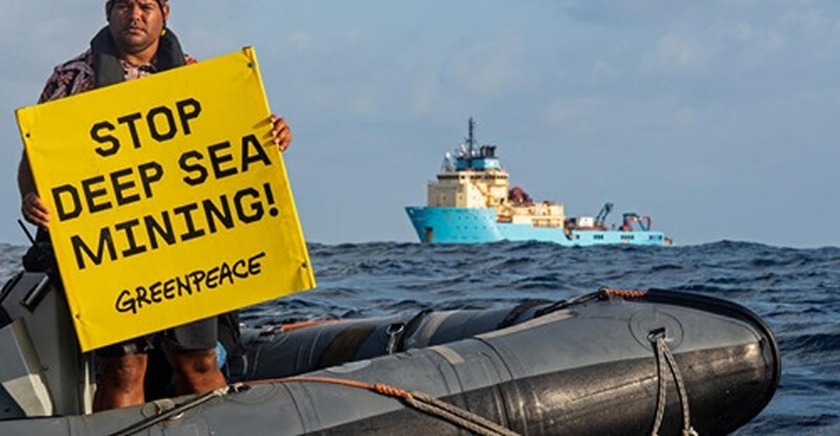 Activists onboard the Greenpeace ship Rainbow Warrior are today taking action hundreds of miles out to sea, against deep sea mining company DeepGreen.

A team of activists are confronting a vessel used by DeepGreen - one of the companies spearheading the push to mine the Pacific Ocean for minerals.

Another protest took place in American port San Diego, where activists confronting a ship chartered by Global Sea Mineral Resources (GSR), a mining company from Belgium. This ship is carrying a pre-prototype mining robot for running tests at depths of over 4,000m on the seabed.

Greenpeace says deep sea mining companies are rapidly advancing their exploration activities and developing technologies for commercial mining of the ocean, with the Pacific being seen as the frontier for this industry.

“The deep ocean is one of Earth’s least understood and least explored ecosystems, which is home to significant biodiversity, and also acts as a vital carbon sink.

“Scientists have repeatedly warned that deep sea mining would have terrible consequences for ocean ecosystems we barely understand, but giant machines are already being lined up for experimental mining of the Pacific Ocean seabed.

“With the worsening climate and biodiversity crises facing us, deep sea mining is a reckless threat to the health of our oceans. The deep sea must stay off-limits to mining.

“The chilling new Netflix doco Seaspiracy has just reminded many of the terrible threats facing our oceans. Deep sea mining is yet another threat which, if not nipped in the bud, could have catastrophic consequences for a system already under strain.”

The deep sea mining industry is dominated by a handful of companies headquartered in the Global North according to Greenpeace.

Last year, a Greenpeace investigation claimed that through subsidiaries, subcontractors and partnerships, three corporations (DeepGreen, GSR and Lockheed Martin) have seized control of deep sea mining contracts covering half a million square kilometres of the seabed in the Pacific.

“Pacific island nations would be left with the consequences of deep sea mining,” says Desmond.

“This practice could exacerbate the impacts they already face from overfishing, pollution and the climate crisis.”

Victor Pickering, an activist from Fiji currently on board the Rainbow Warrior, unveiled a banner reading: “Our Pacific, not yours to destroy.”

“The ocean provides food for our families and connects all of us Pacific islands from one island to another,” he says.

“I am taking action because our people, our land, are already facing the threats of extreme storms, rising sea levels, plastic pollution and industrially depleted fish populations. I cannot stay silent and watch another threat - deep sea mining - take away our future.”

Many Pacific civil society groups, churches, traditional leaders and grassroots activists are vehemently opposed to deep sea mining and have been making their resistance known.

Pacific Island states including Fiji, Papua New Guinea and Vanuatu have also voiced their opposition to deep sea mining, highlighting the risks it poses to the ocean - food source, lifeline, and place of deep cultural significance.

Desmond says: “New Zealand must join countries like Vanuatu and Fiji and call for a ban on mining the ocean, drawing a Pacific Blue Line against this destructive industry. Our future depends on a healthy ocean.”